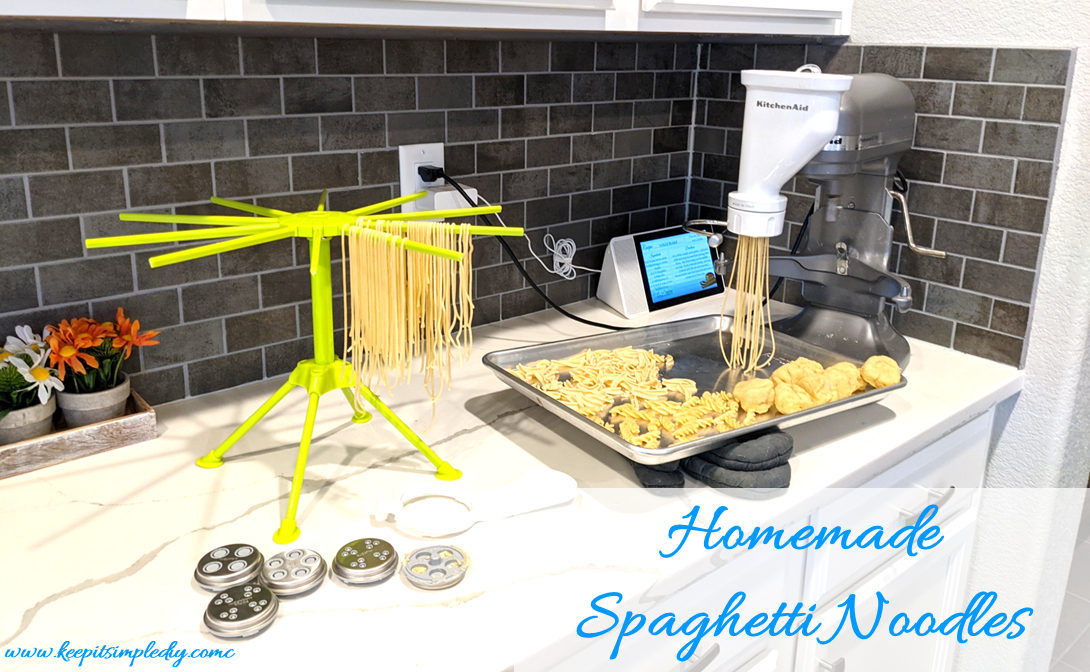 Today’s post is a fun one about homemade spaghetti and other noodles! I’ve been making homemade pasta occasionally since I was 21. Growing up, I saw my parents make gnocci so I knew that it was possible to make noodles from home.

I was living on my own and had to avoid dairy. Finding foods to eat was hard and I had to make almost everything from scratch. At that time, there also weren’t very many dairy free alternatives. I remember there being Daiya cheese, Silk yogurt, and a few different types of dairy free milk. You had to go to more of a specialty store to get them though. Now these items are available at almost any grocery store!

I used a pasta roller like this to roll my dough into long sheets. I then spooned the filling into place and covered with the second sheet of pasta. From there, I sealed the dough and cut the ravioli apart.

I love making pasta from scratch. The pasta in the photo was created using a hand crank pasta press. I cut and pinched the bow-ties by hand and used the press to make the spaghetti.

And here is that spaghetti with some Velveta and butter on it. Delicious!

Something to note with spaghetti noodles that come from the hand press is that they are square, not round. The dough is rolled into thin sheets then cut into thin pieces causing the dough to have four sides.

An easy way to avoid having four sided dough is to use an Extruder like this.

This extruder comes with 6 attachments. One for Spaghetti and 5 for other shorter pastas like rotini and elbow noodles. The attachment hooks on to the Kitchen Aid Mixer and the machine does all the work!

You’ll see in the photo below I had little balls of dough that I was putting through the hopper. They weren’t pulling into the hopper as well as I wanted them to so I ended up smooshing them all together into a long snake of dough. The snake of dough fed through the machine so much better.

I used a drying rack to dry my pasta. The whole process with the machine took about an hour which is the same amount of time it would take to do it with the hand press. It does feel like it’s going slower though because there isn’t any moving of the dough from one setting to the next. You just sit back and let the machine do it’s thing.

The noodles made this lemon pepper chicken and broccoli meal complete! They had just the perfect amount of flavor with just some margarine and the lemony broth from the chicken. I just used a lemon flavored jarred marinade for the chicken. 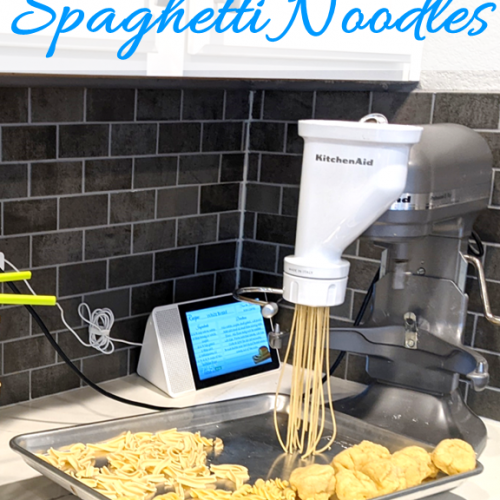 Homemade pasta can be used in these recipes