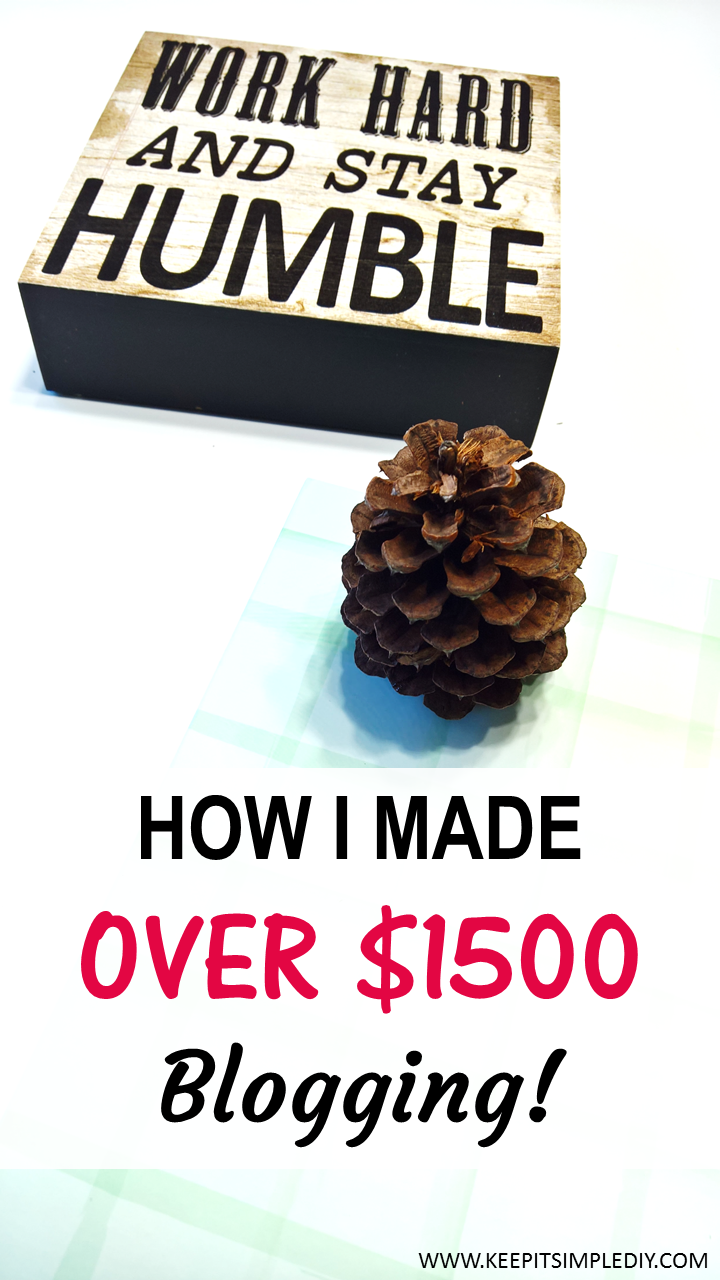 Today’s post is a very exciting one!  I began blogging in July of 2015 and by the end of October 2016, I had made over $1500!  I began this blog because I thought about it one day and realized that I no longer had any hobbies.  I had previously been in grad school, working 50 hours per week, and buying my first house.  This definitely left me no free time.

A few years after life settled down, I was working 40 hours per week and had no side obligations.  I thought about creating another book but I wasn’t really in the mood for a long drawn out project.  Thus, I began the blog with no idea what I was going to write about!

In November of 2015, I made my first $9 on Izea. I think I just got lucky with this one.  I hadn’t been trying to make money blogging at this point but I did know if was something I wanted to look into.  At this point I decided I was going to take my blog more seriously in 2016.

The first step I took towards monitizing my blog was to become self-hosted through wordpress.org.  I made this transition at the end of 2015 and in January of 2016 I added Google Adsense.  Adsense has been by far my most consistent income source.

Here is a rough breakdown of my income sources.

Ads have been by far my largest income source.  I use Google Adsense and Media.net but I’ve only made about $4.00 from Media.net.  The rest comes from Google Adsense.

I do have a trick for Google Adsense.  The more present I am on my blog and social media, the more money I make.  There are quite a few Facebook Groups that I use to gain interaction through my site.  As long as I’m consistently participating in these threads, I see the reward.  One thing to note is that you cannot ask anyone to click on your ads!

Earlier this year,  Izea had a survey for Ebyline, a company they bought that creates product descriptions for Ebay.  I participated in their projects for two months and earned over $400.00.  I haven’t had any freelancing work since.

I’ve heard a lot of great news about affiliate programs but honestly I haven’t been that impressed.  I’ve made about $15 in affiliate programs and could list all of the ones I belong to but, I wouldn’t recommend using any of them.  Plus, it just adds a bunch of unnecessary selling to a page which could turn off your readers.

Sponsored posts are something that just starting working for me!  Early in the year, I had a couple of small sponsored posts through Izea (roughly $10 total).  Once I hit 3000 followers, I was able to sign up for Linquia.  I have now participated in two campaigns and have made about $120.  Something to note here is that I also turned down two campaigns because they didn’t align with my blog or my opinions.

This area is one of my goals to improve over the next year or so.  I have a couple digital products on Etsy and I have my book.  Once I finish my Paycheck Series, I will compile the posts into a digi-book.  At this point, I haven’t seen very much activity or income generated from Product Sales.

Something else to note is that I don’t have a large following.  I get roughly 3000-4000 page views every month.  This stat also just increased from the 2000-3000 range a couple months ago.  Anything is possible.  Best of luck to all of you bloggers!  Let me know if you have any tips as well!